I can’t believe January is already over! I had a great reading month. I read a few books that could possibly make it to my top books of 2018. Any title that has a link goes to any review I have of it, whether it be on my blog or goodreads. I also added what I did not finish and what I am currently reading.

Eliza and Her Monsters by Francesca Zappia

Beneath the Sugar Sky by Seanan McGuire (ARC)

The Hobbit by J.R.R. Tolkien

All We Can Do Is Wait by Richard Lawson (ARC)

Along the Indigo by Elsie Chapman (Netgalley ARC)

Fellowship of the Ring by J.R.R. Tolkien

If you have read any of these books let me know what you thought. Are any of these on your TBR? If you enjoyed reading this post give it a like or follow my blog for future posts! Be respectful and happy reading. 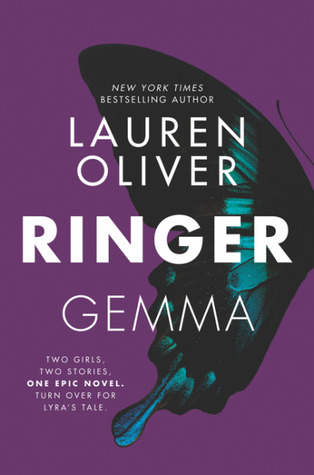 Like its ambitious companion novel, Replica, this far-reaching novel by powerhouse bestselling author Lauren Oliver digs deep into questions of how to be a human being in a world where humanity cannot be taken for granted.

In the world outside the Haven Institute, Lyra and Caelum are finding it hard to be human—and neither of them knows where they belong or who they can trust. When Caelum leaves without warning to pursue the dream of a place he belongs, Lyra follows him, convinced that together they will hunt down a cure for the illness that’s slowly consuming her mind. But what they uncover is a shocking connection to their past—even as their future seems in danger of collapsing.

After discovering the uncomfortable truth about her connection to the Haven Institute, Gemma struggles to return to her normal life. But when she learns that her controlling and powerful father has new plans for Lyra and Caelum, Gemma and her boyfriend, Pete, leave in the middle of the night to warn them of the danger they face.When an untimely accident derails them, they are mistaken for the escaped replicas and seized by strangers hired to capture them. The Haven Institute wasn’t destroyed after all, and now Gemma is the one behind the walls.

Lyra’s and Gemma’s stories can be read separately—with either story first—or in alternating chapters, but no matter which way you turn the book, the two distinct stories combine into one breathtaking experience for both heroines and readers alike.

“You built your life into meaning, you transformed it into liquid faith, again and again, like a web; you did it blind, by instinct, because to not do it would be to stop living.”

I truly did not enjoy this book as much as I enjoyed the first one. I wanted more of the science aspect to shine through in this one. We do learn a lot more about Haven and what actually went on, but I wanted all the science all the time. I was yearning for it and it let me down.

The thing that really threw me off was the romance. It was so cringe worthy I wanted to vomit all over the book. That’s the only way to describe how bad it was. On top of that, I listened to the audio book as I read along and that made it worse. The narrator whispered the romantic scenes. I just about couldn’t handle it.

Then the cherry on top was the characters. They just seemed like blank canvasses. It was the same in Replica but I felt like I could connect with them a little more in that book. I wanted to know more about them. Ringer just made me hate them. If I had to choose the character that bothered me most I would have to say Caelum. He was a whiny little baby and I couldn’t handle him. Just suck it up buttercup.

Overall I will admit that it was a very fast read. I basically read half the book in one day, and it’s not that hard to remember all the information from it. If you want to read this because you also read Replica then be my guest. Otherwise I personally wouldn’t waste my time if you’re thinking it’s going to be better than Replica. You might end up loving it though. Who knows? I don’t recommend it though.

If you read this book let me know what you thought of it in the comments. Have you also read Replica by Lauren Oliver? If you enjoyed reading this post give it a like and follow me for future posts. Be respectful and happy reading!