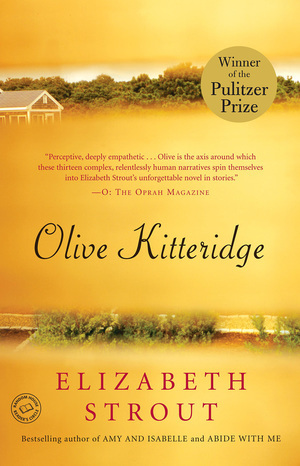 Winner of the Pulitzer Prize, Olive Kitteridge offers profound insights into the human condition – its conflicts, its tragedies and joys, and the endurance it requires.

At times stern, at other times patient, at times perceptive, at other times in sad denial, Olive Kitteridge, a retired schoolteacher, deplores the changes in her little town of Crosby, Maine, and in the world at large, but she doesn’t always recognize the changes in those around her: a lounge musician haunted by a past romance; a former student who has lost the will to live; Olive’s own adult child, who feels tyrannized by her irrational sensitivities; and her husband, Henry, who finds his loyalty to his marriage both a blessing and a curse.

As the townspeople grapple with their problems, mild and dire, Olive is brought to a deeper understanding of herself and her life – sometimes painfully, but always with ruthless honesty.

“She remembered what hope was, and this was it. That inner churning that moves you forward, plows you through life the way the boats below plowed the shiny water, the way the plane was plowing forward to a place new, and where she was needed. She had been asked to be part of her son’s life.”

Story | This is a bunch of stories mashed into one book. There were some that I absolutely loved and felt sympathy for, and there were others that I didn’t care about. This is a character-driven novel from front to back. It’s difficult to describe what this is even about, other than how influential Olive is to all of these mismatched people.

I mainly enjoyed learning about the relationship between Olive and her son. She acts like a tough woman, but deep down she just wants to be a good mom. She wants to make him feel like he’s loved, but tough love is all she knows how to give.

I’ll just say this: If you are going into it just for the story, then it might come off as a bit disappointing. I wouldn’t recommend it for people who don’t enjoy character studies.

Characters | The characters in Olive Kitteridge are discernible and witty while living mundane lives. They constantly display raw, unfiltered emotions. I have personally never read a book that focused so much on the characters and the influence they all have on one another. They prove to the reader that it’s a small world out there, and we are part of it for such a short amount of time that any opportunity to influence someone else is worth the time and energy.

If anyone exceeds at their job as an influencer, it’s Olive Kitteridge. She refuses to see eye-to-eye with children, but by golly she can give advice like the dickens. Is she difficult to deal with sometimes? Most definitely. Can she get a little condescending? Yes, but that doesn’t take away from all of the wonderful that is deep down inside of her.

Henry, Olive’s husband, does take a lot of crap from Olive. He just wants to spend time with her, but she would rather talk about how much she does for him and their son, Christopher. Regardless, I wasn’t fond of Henry. He treated marriage as some sort of symbol. There was a specific scene where he asked her to go to church with him. When she refuses, this is what he thinks in his head:

“Going without her seemed a public exposure of familial failure.”

I don’t attend church—different strokes for different folks—so I don’t see what marriage has to do with anything involving church. I think judging someone for not going is trivial. The relationship between an individual and God is just between those two. This is just my opinion, and I won’t go into further detail. Long story short; I didn’t like Henry.

There are a lot of other characters in this book that it’s almost impossible to talk about each one. There are a lot of different lessons to learn from each one. Stories about families, friends, and old lovers come together to form this crafted piece of literature.

Writing | There is no doubt that Elizabeth Strout is a fantastic writer. She has a way of creating characters that I’m sure no one else can quite compare to. They are all so deeply flawed, which allows different personality types to read the book and connect with at least one character, or one part of a character. The descriptions are short and sweet. She definitely doesn’t over-do it. I can see why it won the Pulitzer Prize, but it just didn’t hit that level.

Overall | I honestly didn’t enjoy this one as much as My Name is Lucy Barton, but I had fun with it. The concept is different from anything else I’ve read. The ending was really what saved it from being a measly three-star read. The beginning fell flat, and I ended up putting it down for a bit. I knew that if I didn’t finish it in one go, I just wouldn’t finish it. The message behind the book is much appreciated by this avid reader, but not quite a new favorite.